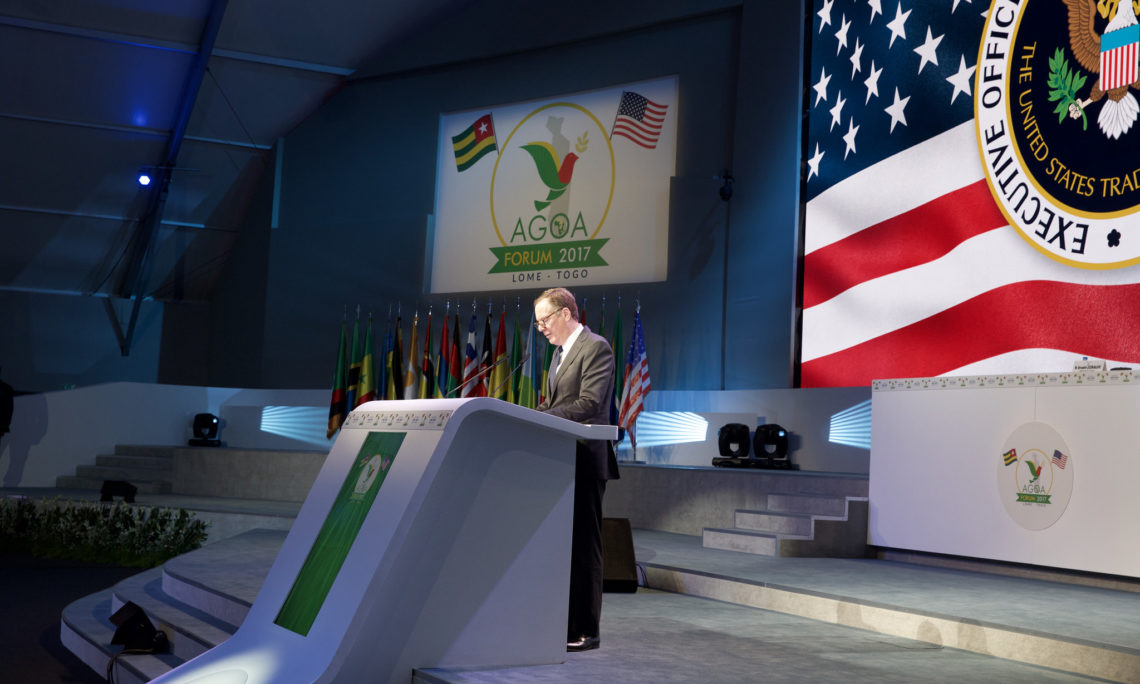 Mr. Robert Lighthizer, United States Trade Representative (USTR), during his remarks at the opening of the ministerial plenary of the 16th Forum of the Africa Growth and Opportunity Act (AGOA), on Aug. 9 in Lome.

“The United States is committed to Africa.”

This was the message delivered by Robert Lighthizer, United States Trade Representative (USTR), during his remarks at the opening of the ministerial plenary of the 16th Forum of the Africa Growth and Opportunity Act (AGOA), on Aug. 9 in Lome.

The annual forum brings together senior government officials, business leaders, and civil society actors from the U.S. and across Sub-Saharan Africa to discuss ways to boost trade and maximize the effectiveness of the AGOA program, which has been the cornerstone of U.S.-Africa trade relations since 2000. The theme of the 2017 Forum is “The United States and Africa: Partnering for Prosperity through Trade.”

Close to 1,000 delegates gathered in Lome for the event, which began on Aug. 8 with events incorporating private sector, civil society, and U.S.-sponsored African Women’s Entrepreneurship Program (AWEP) participants, followed by two days of ministerial plenaries with representatives from the United States and the 38 African beneficiary countries. The U.S. delegation included senior officials from the U.S. Departments of State, Agriculture, Commerce, Labor, and Transportation, as well as other U.S. government agencies and Congress.

Key topics that were discussed during breakout sessions during the ministerial plenary were: the role of regional integration and transportation infrastructure in developing competitive supply chains; tools for maximizing the returns on infrastructure investments; models for increasing agricultural productivity and scaling up agri-business investments for agriculture; the role of small and medium enterprises, especially those led by women, in driving economic growth; and many more.

Above all, the forum was an opportunity to take stock of the U.S.-Africa trade relationship and discuss how it can evolve in a rapidly changing economic landscape.

“Together, we can create a better business environment and chart a path toward a stronger and more sustainable trade relationship for the future,” Lighthizer said.