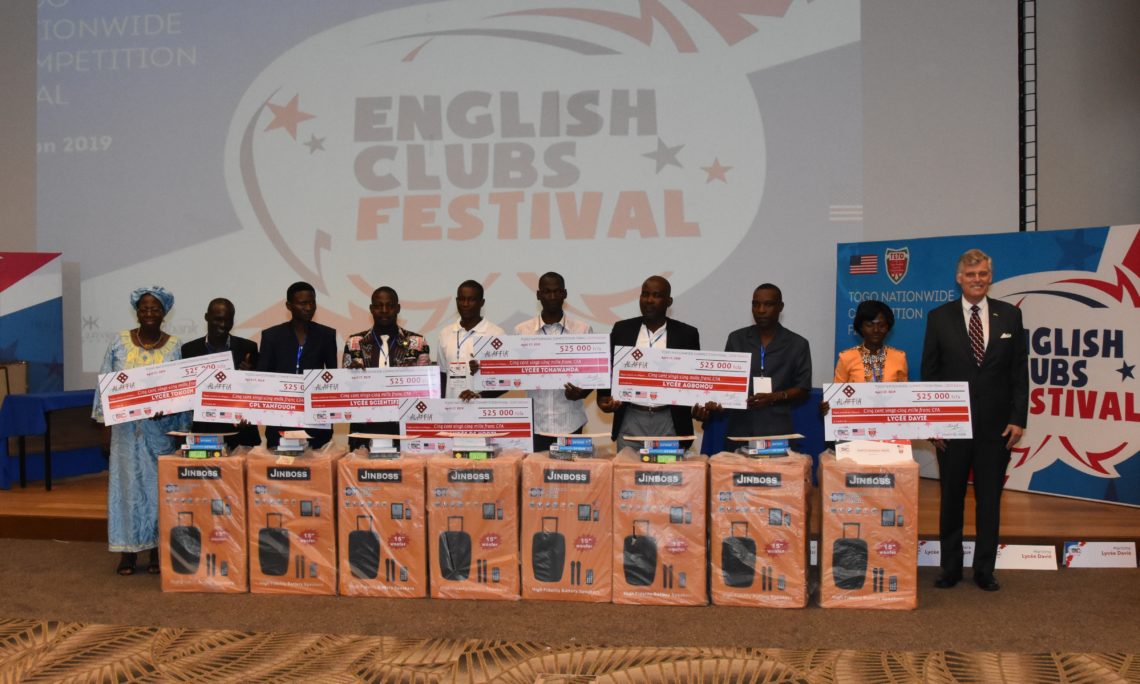 English Club coaches pose with ALAFFIA representative on the left and Ambassador Eric W. Stromayer on the right

Monsieur the Regional Director of Education, Representative of the Ministry of Primary and Secondary Education

As you may know, I arrived in Togo only a few weeks ago, and I am trying to learn everything I can about Togolese culture.    I understand that the English Clubs Competition is a natiowide initiative, and the teams here today represent all the regions of Togo. So, with your permission I would like to try out a few greetings in local language.

Thank you. Obviously, I need to keep practicing!

I’m told that there are at least 40 different languages spoken in Togo. These languages represent the heritage and the richness of Togolese culture, and it is very important that we preserve and maintain these languages.

I began my speech by praising local langauges because I want you to know that when we promote the English language, we do do not do so hoping that English will take the place of your local languages. Nor French, for that matter.

We want you to continue speaking those languages, but at the same time, we think it is very important that you also speak English.  Whether it is your second or third or fourth language, English is incredibly important to success in today’s global economy.

Why do I say that? Because more than ever, English is the global language. It is the language of science, the language of the internet, and the language of international business and diplomacy. It is the most commonly spoken second language in the world. That means that whenever people who don’t share a common language need to communicate, they do it in English!

Look at the examples of our wonderful sponsors. Ecobank is a bank with branches across Africa. Even though its headquarters is here in Togo, all its staff speak English as well as French. Because, if not, how can they do business? Or consider the Hotel 2 Fevrier. The staff here all speak English. Why? Because they have an international clientel.

English is the language of your neighbors Ghana and Nigeria, thus English is the key that will enable Togo to unlock its potential and become an important regional transportation, shipping and logistics hub with regional and global connections. That economic potential could raise the living standard for Togo’s seven million inhabitants and establish the country as a rising star in Africa. But in order for that to happen more Togolese must speak English.

That is why, three years ago, the U.S. Embassy, in partnership with TETO, created the nationwide English Clubs Competition. Our goal was to encourage students all across the country to practice speaking and communicating in English. To date, more than 25,000 students have participated in the competition. And I am happy to tell you that those who have competed are performing better in school, are getting better grades on English exams, and are going on to great success at the University level. Some have even translated their mastery of English into jobs.

All of you in this room this afternoon are here because you have demonstrated great mastery of the English language. You are the best English speakers at the high school level in all of Togo. I want to take this opportunity to thank you and congratulate you for your hard work and dedication –despite many obstacles – to improving your English skills. I also want to offer my sincere thanks to the coaches and parents here today. We know that without your support and commitment these children could not have achieved what they have achieved. Let’s give all the students, teachers, coaches, and parents a big round of applause!

To conclude, let me just say this: We will crown a champion today, but I want you to know that you are all winners. You are winners because you have improved your knowledge of English and your ability to speak with confidence and clarity. That knowledge will create a brighter future for you, your families, your communities, and for the whole country of Togo.

Thank you very much and good luck!