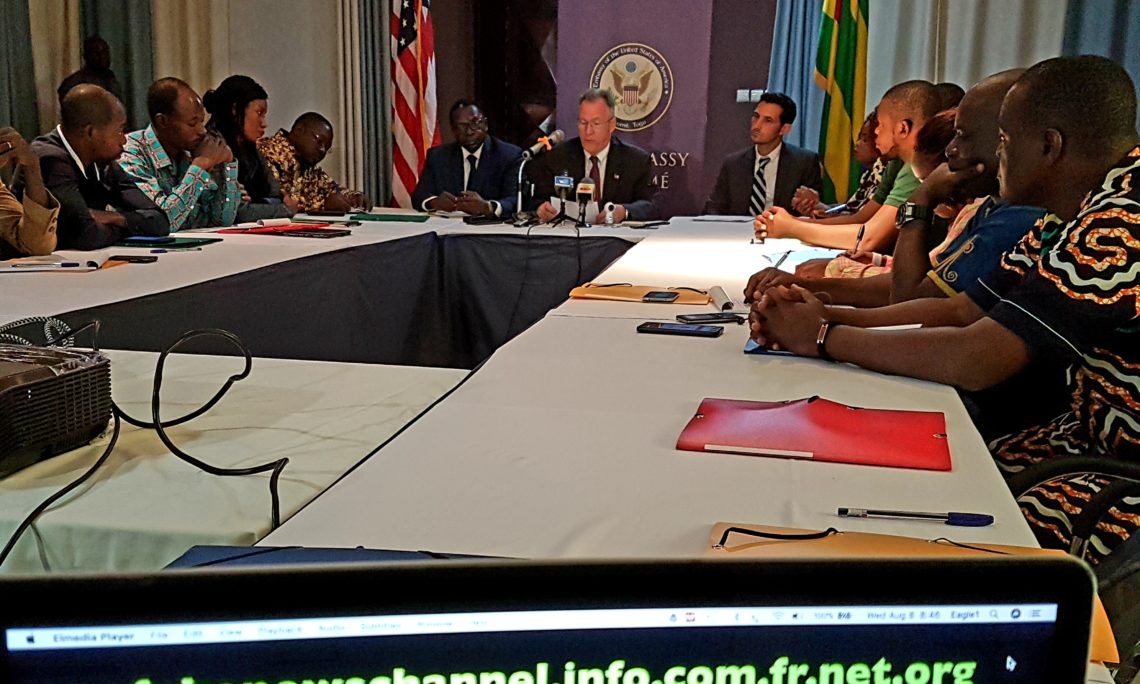 Ambassador David Gilmour during his remarks at the workshop

I am pleased to be with you this morning for the opening of this important workshop. The subject of this workshop is misinformation – commonly called “fake news” – and it is one of the biggest threats facing democracies around the world today.

It is true that the existence of misinformation is not new, nor is the susceptibility of people to be deceived by it. Mark Twain, the US author, once said, “a lie can travel halfway around the world while the truth is putting on its shoes.” Nowadays, however, social media has exacerbated the problem, accelerating the speed at which false stories spread, creating “digital wildfires” of misinformation.

The news may be fake but the consequences are real, and they are serious.

Right here in Togo, false rumors and doctored videos purporting to show ritual killings committed by a network of criminals from Benin known as “Gaymen” created mass hysteria to the point that the President of Benin had to step in to calm things down.

And we all know how fake news exacerbated the tensions caused by the political crisis here over the past year.

Now, mobs killing people is one very obvious result of the spread of fake news, but there is another negative impact that is harder to detect. I am speaking of the slow deterioration of respect for facts that takes hold when we are submerged in a fake news environment. When this happens, debates around public policy are framed largely by what “feels” true and what correlates with people’s pre-existing set of beliefs and prejudices, which can often be disconnected from actual facts and the specifics of policy.

This is a gravely serious problem, because for a democracy to function well, it requires a citizenry that is well-informed and operating on the same set of basic assumptions.

Facts do exist. They are out there; we cannot operate without them. Moreover, I believe that the vast majority of people still value and want truthful information. Our challenge, then, in the face of the growth of misinformation and fake news, is to help people separate fact from fiction. You, my friends, are the key to this effort.

You were chosen to participate in this workshop because of your special skills and outstanding reputations. As established journalists, you already know how to verify information and seek multiple sources before sharing information. More importantly, because of your positions and your reputations, you are all influencers.  Influencers are credible voices that can deliver messages that resonate with different populations, such as NGOs, schools, young people, civil society leaders, religious leaders, and governments.

In the months to come we will be counting on you to spread the message that fake news is damaging and dangerous, and to educate the people in your different social networks and communities to be vigilant against the threat of false information.

It is a big challenge but I have great confidence that you will succeed. Know that the Embassy will be there to accompany you.

Thank you for your attention. I wish you a very productive and illuminating workshop.