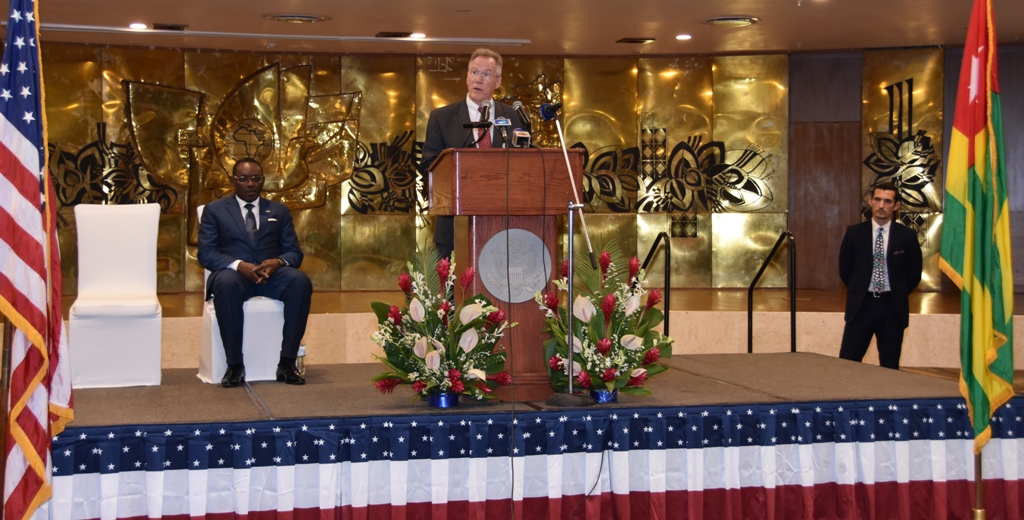 Ambassador Gilmour during his speech

(Salutations according to protocol)

Good evening and thank you for coming to celebrate the 242nd anniversary of the independence of the United States of America.

Our celebration is possible thanks to the generous financial support of several private sector donors. Some are American companies, others are companies that sell American goods and services, and others have business relationships with the United States.  In alphabetical order, they are:

The Embassy is proud of our partnership with the private sector here in Togo.  Please join me in thanking our donors with a round of applause.

Ladies and gentlemen, this annual celebration gives us the opportunity to reflect upon the past year.  I am proud of two major achievements this year that significantly deepened the relationship between Togo and the United States.

The first was the AGOA Forum in August 2017, which brought hundreds of Americans to Lome, including high-ranking government officials and business leaders.  Most of them visited Togo for the first time.  They were very impressed with the exceptionally warm Togolese welcome, the high caliber of infrastructure, and the exceptional level of professionalism of the forum organizers.  They praised the AGOA Forum in Lome as the best ever, since its beginning in 2002.  Our team at the Embassy is working to build on the success of the AGOA Forum to attract American companies to look at Togo as a destination and a platform for investment.

The other major achievement this year was the approval of the Millennium Challenge program, or MCC.  At $35 million, it is the largest assistance ever granted to Togo by the United States.  The MCC program will soon begin helping Togo to make critical reforms in telecommunications and land registry, two of the greatest constraints to economic growth.  Most importantly, the Government of Togo has made a strong commitment to enact these difficult reforms that will bring greater prosperity and economic opportunity for all Togolese.

Ladies and gentlemen, I have been in Togo for 2-1/2 years, and anyone who knows me knows that I am very optimistic about Togo and its enormous potential.

I believe in the potential of Togo’s natural assets: its deepwater port and its strategic location at the heart of the sub-region, a market of more than 360 million people.  I applaud the investments that are transforming Togo into a modern logistics hub.

I believe in the richness of Togo’s land and the enormous potential of agriculture.  I believe in Togo’s potential to be a world-class destination for tourism and international conferences.

Most of all, I believe in you, the Togolese.  You are creative, dynamic, hardworking, and you are the friendliest and most welcoming people in West Africa.

Ladies and gentlemen, I believe Togo has all the elements necessary to “take off” and build prosperity for all its citizens.  Despite all of those advantages, however, I have found that many Togolese are discouraged.  They don’t see opportunity for themselves.  Many talented people have left the country.

Togo can realize its tremendous potential only if all its citizens believe they have a voice and can make a contribution to building the country.  I believe that change can only occur through stronger and more inclusive democracy.

The local elections planned for this year are a historic opportunity to expand democracy in Togo. The creation of hundreds of new elected offices will bring government closer to the people.  It will compel elected officials to be responsive to the needs of the citizens, and create a new kind of interaction between Togolese and their government.

In a democracy, elections are the platform for expressing the will of the people and for making critical decisions.  Togo must not be an exception.  I encourage all the political actors to participate in the elections, both local and legislative.

More importantly, all parties and partners must work conscientiously toward well-administered elections, so that Togolese will be confident that their voices are heard.

As Togo moves toward elections, there is a particularly heavy responsibility on the authorities to protect the fundamental rights of all Togolese, and to ensure that there is complete freedom of assembly and freedom of speech, everywhere in the country.

A country’s prosperity depends on political stability.  That is true in Togo, the United States, and every other country.  Togo is in competition with its neighbors and countries around the world to attract investment.  Investors will only come to Togo if there is political stability.

A few minutes ago, I spoke about my optimism for Togo.  One thing that gives me hope for Togo’s future is its young people.  I have met so many young impressive young people– inventors, entrepreneurs, artists, and community activists. All of them are burning with a passion to make positive change in their communities.  I’m very proud of the Embassy’s many activities and exchange programs to encourage and assist them.  For example, right now 10 dynamic young leaders are not with us this evening – because they are in the United States, participating in the Mandela Washington Fellowship, the YALI program.

However, many of Togo’s talented young people are with us tonight, as we feature the theme of our celebration: social entrepreneurship.

Social entrepreneurship is a new idea that uses the principles of business to solve social problems.  These are businesses that make a profit, but their reason for being is to make a positive contribution to society and improve the quality of life.  The social enterprise model has great potential to accelerate sustainable development in Togo.  A few weeks ago, the Embassy organized the first-ever international conference on social enterprises to promote these ideas in Togo. I invite you to visit the stands to my left where you will see Togolese and American social enterprises and meet these creative entrepreneurs.

Thank you once again for joining us this evening.  To conclude, I ask you to raise your glass and salute the friendship between the United States and Togo.