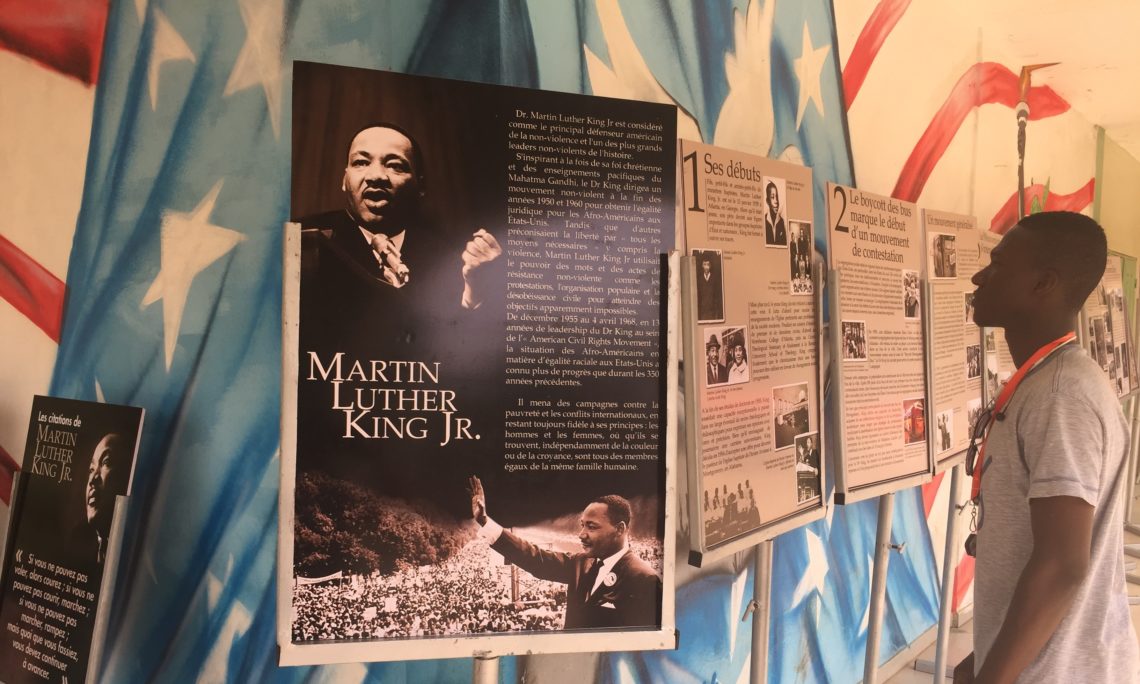 A moment of contemplation and reading of the most famous quotations at Kara.

To celebrate Black History Month and the life of Martin Luther King, Jr., the U.S. Embassy organized a traveling historical exhibit paired with a series of public music concerts in four major Togolese cities from Feb. 19-23.

The concerts featured a selection of songs from the American civil rights era performed by Heather Maxwell, a singer, songwriter, and radio DJ who hosts Voice of America’s popular program Music Time in Africa. She was backed by a local musicians and a choir group from the University of Lome. Ms. Maxwell’s participation was made possible by the State Department’s Arts Envoy program.

Not only did the concerts feature music from the civil rights era, but at each venue the Embassy installed a pop-up photo exhibit recounting Martin Luther King’s life and historical impact, as well as highlighting several of his most famous quotations. This allowed the program to underscore in an even stronger way its key messages of non-violence, respect for human rights, and civic engagement

The program began in Lome on Feb. 19 with a concert at the U.S. Ambassador’s residence. It then moved to Sokode where a concert was held at the Center of reading and cultural animation (CLAC, which was recently renovated thanks to funds provided by the Embassy. A third concert was held in Kara on the campus of the University of Kara. The program concluded with a concert in Dapaong, Togo’s northernmost city. By traveling into the interior of the country, Embassy personnel where able to engage with audiences that can be difficult to reach via traditional means of communication.

Approximately 2000 people attended the various concerts in person, while many thousands more were able to see portions of them on social media or via broadcasts on Voice of America.