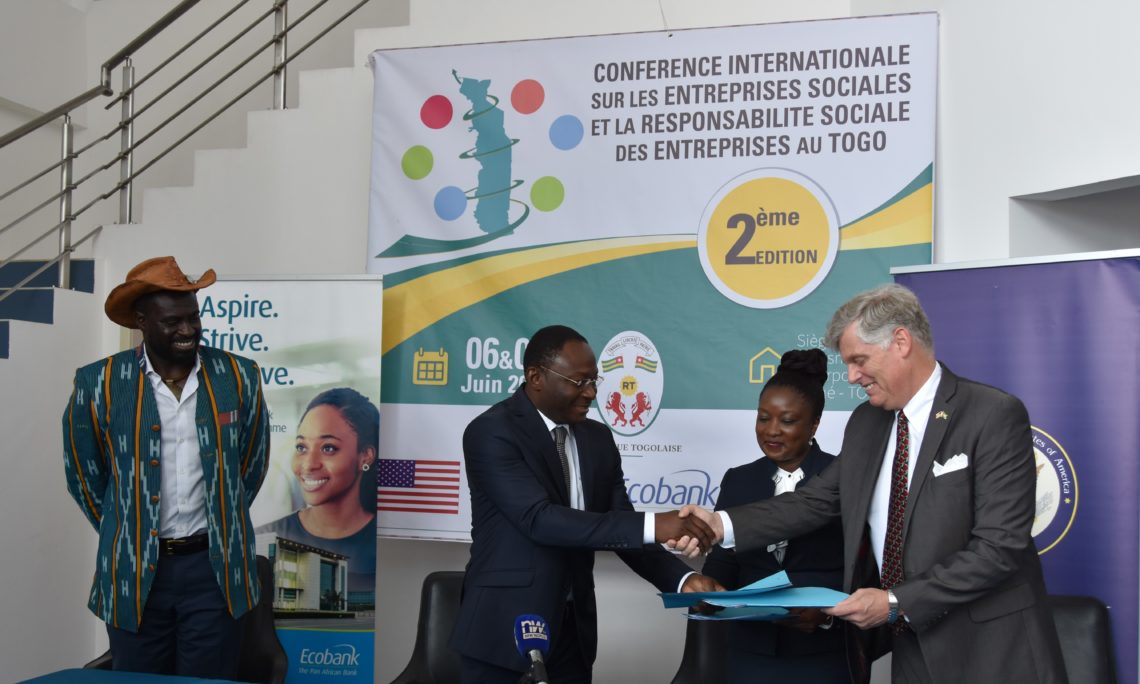 The U.S. Ambassador, the head of commercial banking for Ecobank, and the permanent secretary of the National Council on Youth Employment exchange the agreement, which will pair 100 young social entrepreneurs

Togo took one major step closer to becoming a regional leader in the promotion of social entrepreneurship last week when it hosted the second international conference on social enterprises and corporate social responsibility. The event was sponsored by the U.S. Embassy, the Government of Togo’s National Council on Youth Employment, the pan-african bank Ecobank, and the American fair trade cosmetics company Alaffia. It took place June 6-7 at Ecobank’s world-class conference facility and featured 300 participants and a roster of expert speakers coming from the U.S., France, Togo, Cameroon, Switzerland, and South Korea.

The purpose of the event was to strengthen Togo’s ecosystem of social entrepreneurs and show how social businesses and corporate social responsibility can be motors for economic growth while helping to address development challenges.

The event was bookended by two major announcements. The first was the creation of a mentoring program for young social entrepreneurs, which was announced during the opening ceremony on June 6. The U.S. Ambassador, the head of commercial banking for Ecobank, and the permanent secretary of the National Council on Youth Employment signed the agreement, which will pair 100 young social entrepreneurs per year with specifically chosen mentors from Ecobank’s staff. The second major announcement was the declaration released by the organizers of the event at the close of the conference. The “Declaration of Lome” calls for the elaboration of a legal framework that recognizes and supports social businesses as unique entities different from traditional businesses or NGOs. This declaration will serve as the foundational document for continued advocacy efforts to support social enterprises in the years to come.