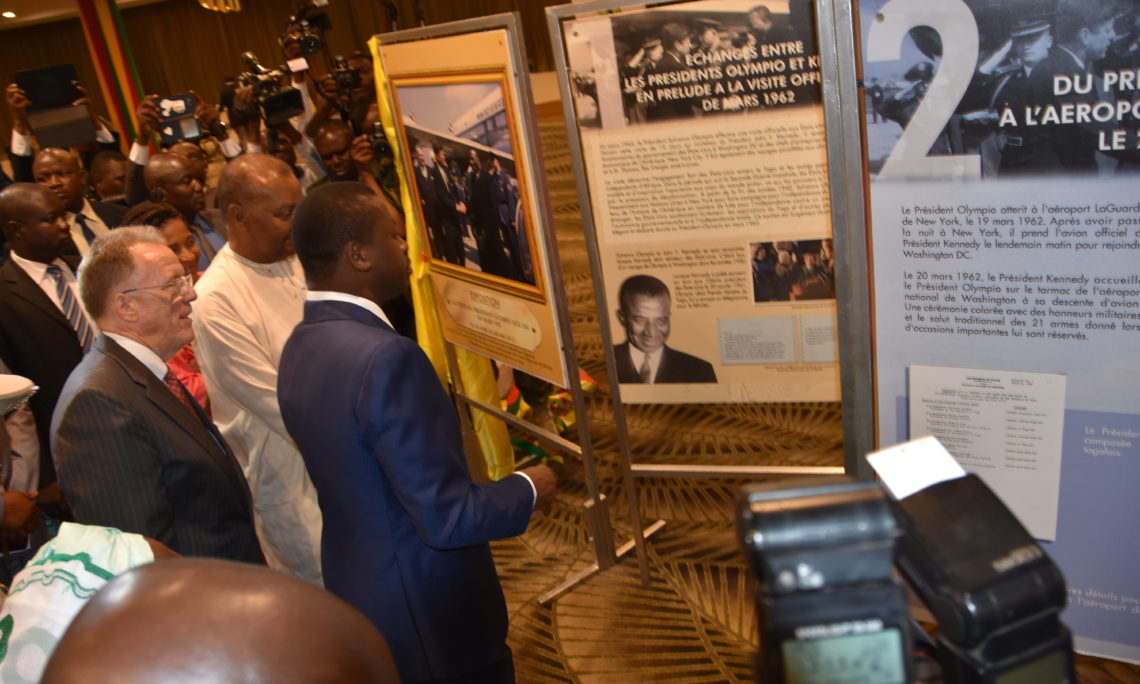 The launch of a new photo exhibit created by the Embassy’s Public Affairs Section has encouraged political healing in Togo. The exhibit, chronicling the state visit to Washington, D.C. and New York of Togo’s first President, Sylvanus Olympio, in 1962, was unveiled during a ceremony at the Radisson Blu Hotel in Lome on April 26.  Presiding over the ribbon cutting ceremony was Togolese President Faure Gnassingbe, joined by Gilchrist Olympio, his longtime political rival and the son of Sylvanus Olympio. The more than 300 guests at the ceremony applauded and some even cried as the two former rivals embraced after the opening remarks, signaling a possible thaw in political tensions in the country.

“I believe that this exhibition marks a historic step forward for reconciliation in Togo, and I hope it will inspire a spirit of transparency and openness for all Togolese to examine the history of the country in the years to come,” said Ambassador David Gilmour in his remarks at the opening ceremony,

The exhibit was organized by the U.S. Embassy in collaboration with the High Commission for Reconciliation and Reinforcement of National Unity (HCRRUN), Togo’s truth & reconciliation body. The rehabilitation of President Olympio’s image was one of the recommendations put forward by HCRRUN to heal wounds created by years of political violence.  After the opening ceremony, the exhibit was moved to the Palais du Congres, where it will be open to the public during the month of May, so that more Togolese – especially the younger generation – can have an opportunity to learn about the first president of the country.

The photos used in the exhibit come mainly from the John F. Kennedy Archives, in Boston, MA; the New York Municipal Archives in New York City, NY; and the personal collection of the Olympio family.