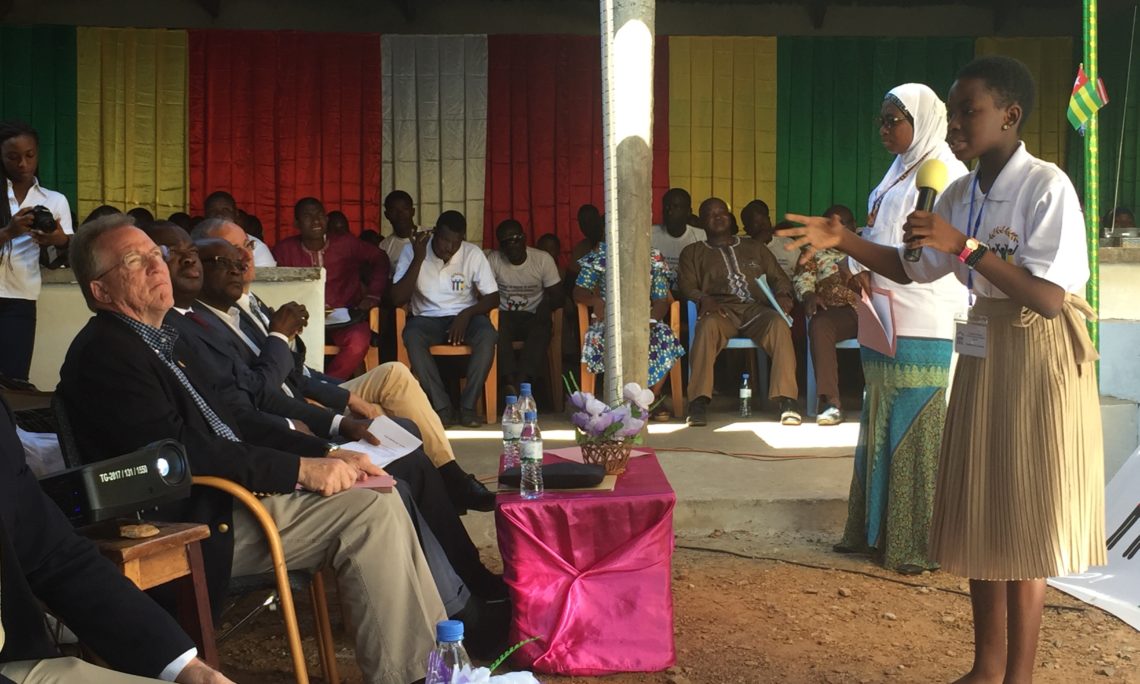 Participants following the presentation on the training activities

The U.S. Embassy has been at the forefront of efforts to promote peace and social cohesion in Sokode following the eruption of violence that occurred in 2017. The latest initiative, entitled “Youth of Sokode on the Move for Social Cohesion,” was officially launched by Ambassador Gilmour during a ceremony at the Library and Cultural Center (CLAC) in Sokode on Nov. 16.

The project involved training 100 youth from different at-risk communities to de-escalate conflicts and work together for development. Funded by the U.S. Embassy, the project was implemented by the humanitarian relief agency Catholic Relief Services (CRS). CRS organized two social cohesion workshops in October that were led by a conflict-resolution expert with experience working in war zones. The group of 100 youth who were trained will form the basis of the “Youth on the Move” initiative. During the ceremony on the 16th, Ambassador Gilmour pledged to fund a series of “connector projects” developed during the workshops, which will ultimately reach more than 5,000 youth in Sokode.

Another aspect of the initiative was the transformation of an auditorium inside the CLAC into a new community center. During the 2017 violence Sokode’s only space for community gatherings was destroyed. The renovation at the CLAC will allow not just youth but all members of the community to have a space to discuss and plan projects that improve social cohesion and boost development. Ambassador Gilmour and Mr. Richard Soli Toki, representative of the Minister of Culture, cut the ribbon to inaugurate the new community center at the close of the ceremony on Nov. 16

In addition to the U.S. Embassy and the Ministry of Culture, numerous other government agencies, diplomatic missions, and civil society organization were present at the event to show their support for peace and social cohesion in Sokode. The ceremony was also the occasion for some of the young participants to give testimony about the impact of the project. One teenage girl who participated said she now realized “each one of us is made of gold.”