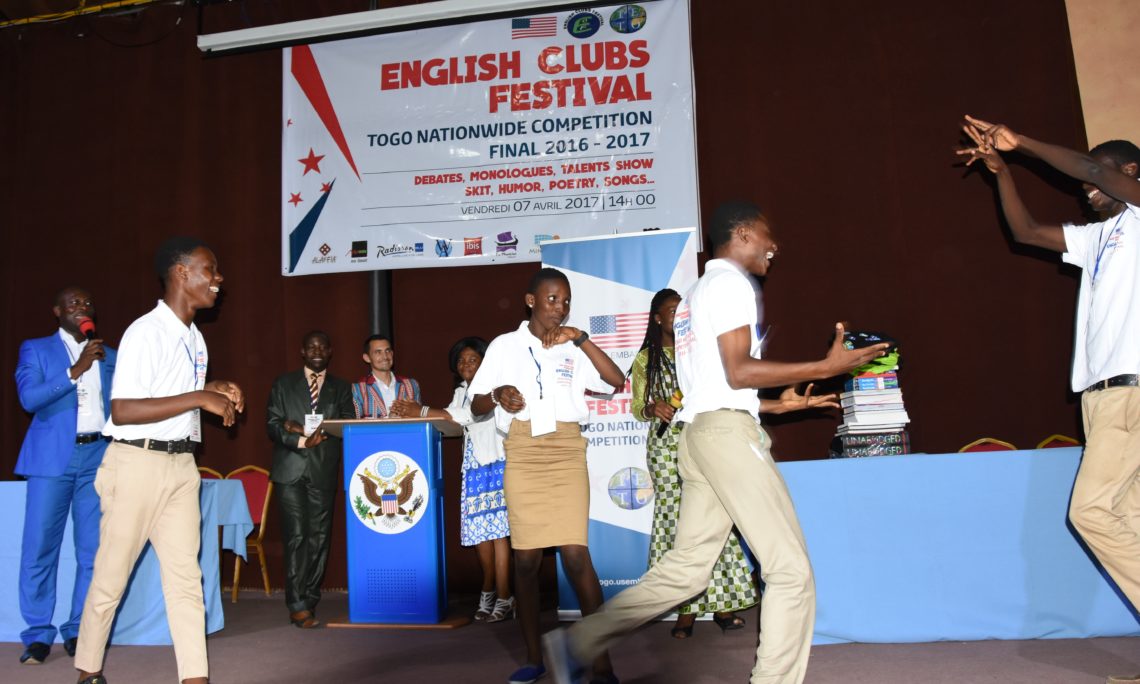 Togo’s best English Clubs squared off against each other April 7 in Lomé in the final event of the 2016-2107 English Clubs Competition sponsored by the U.S. Embassy and the Togolese English Teacher’s Organization. The event was the culmination of a seven-month long series of English Club competitions held throughout the country in which almost 6500 secondary school students participated. The final pitted the eight best teams from each region of the country against each other in a contest that featured debate, sketch, and monologue.  This year’s winning team came from the town of Baguida, just outside of the capital city of Lome.

The purpose of the competition was to boost the popularity of English Clubs as a way to encourage more Togolese students to study English. Before the competition began, the Embassy’s educational advisor and representatives of TETO first held training sessions for all the clubs, during which they distributed an English Clubs Handbook prepared by the Regional English Language Office (RELO).  This meant that for the first time all English Clubs in Togo were using the same material. The next step was a series of local competitions followed by competitions in each region of the country to select the best regional clubs. The winners of these events were invited to attend the grand final in Lomé.

Government and business leaders in Togo often comment that the lack of English speakers is an obstacle to economic growth. As a way of demonstrating the link between English and financial success, the U.S. Embassy partnered with eight corporate sponsors to ensure that the 64 participants in the final event of the Competition all received internships, in addition to prizes for participation.

Thanks to the popularity of this initiative, membership in English Clubs has already jumped by 20-30 percent. The Embassy plans to expand the program in 2017-2018.