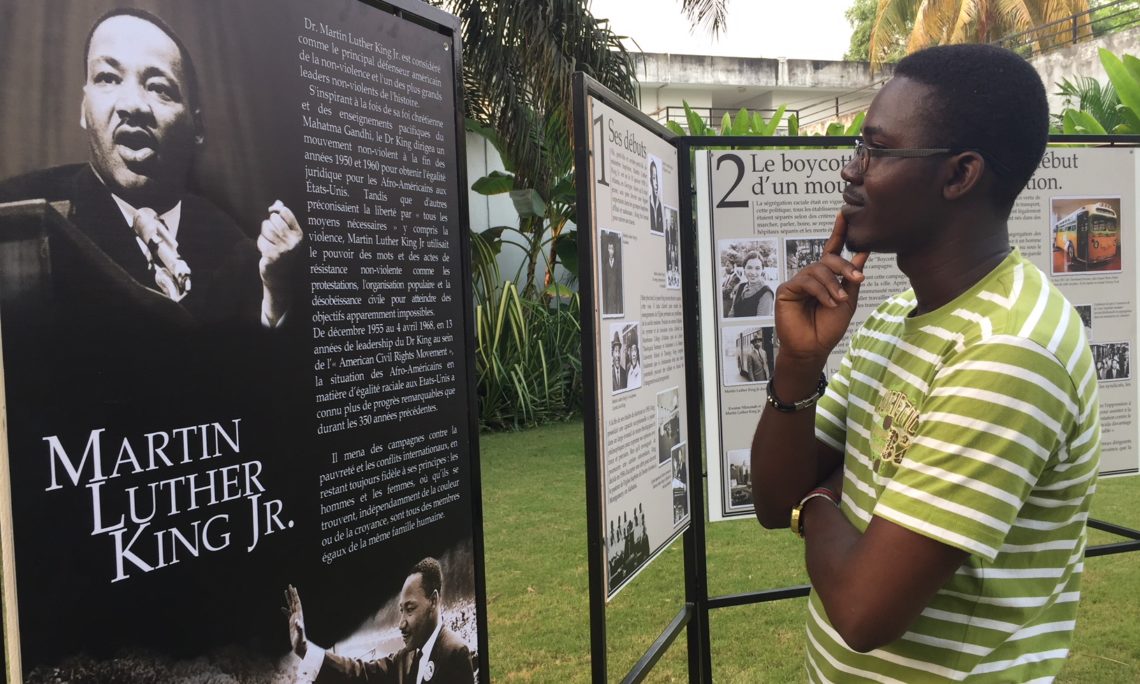 Reflection and meditation time for one of the guests

Good evening. It is a great honor for me to welcome you to my residence, and I am very happy to see such a large number of friends from all sectors of Togolese society in the audience.

Tonight, we celebrate the life of Dr. Martin Luther King, who – though he lived to be only 39 –profoundly changed the direction of American life.  His legacy of fighting for peace, justice, and equality continues to inspire people around the world today.

This year marks the 50th anniversary of King’s death, and in tribute to him, the U.S. Embassy has created an exhibition about his life and message. I hope you have had a chance tonight to look at the panels we have installed in the garden. We intend for this exhibit to inform about Dr. King’s life, but also to challenge us by asking, what are we doing to live up to King’s legacy?

I’m very proud to tell you that, after tonight, this exhibit will be open to the public at our American Corner on the campus of the University of Lome, and we also intend to display it in other cities.

To make tonight even more special, in a few moments we are going to begin a concert that we have put together as a musical tribute to Martin Luther King and to the American Civil Rights Movement of the 1960s. The music you will hear is the music that served as “the soundtrack” to the civil rights movement led by Dr. King. I hope you enjoy it!

I think it is my obligation to offer a few words about why Martin Luther King’s message remains so powerful. Few figures in American history loom as large as King, and yet, he is not just an American hero. King always believed that he was a global citizen. As he said, “We are caught in an inescapable network of mutuality, tied in a single garment of destiny.” This means that King’s message is as applicable to a Togolese person in 2018 as it was to an African-American in Birmingham, Alabama in 1963.

What lessons, then, should we draw from King’s philosophy that can be applied to the current context in Togo? Above all, I suggest the following: the eternal possibility of redemption and reconciliation.

The civil rights struggle in the U.S. was not a struggle to overthrow one order with another. It was an effort to correct an historical injustice, to make America better and stronger as a nation. Many are familiar with King’s famous “I Have a Dream” speech, where he imagined a future of racial harmony and equality. But King’s dream was, as he put it himself, “deeply rooted in the American dream.” It was a call to action to a nation that had veered off course, to return to the right path.

The ethicist Jonathan Haidt has said that, “King’s speech is among the most famous in American history because it framed our greatest moral failing as an opportunity for national reconciliation.”

As a preacher, King held the Christian view that human beings are by nature flawed, and this extends to the systems of government they create. But at the same time, King believed that humans, and governments, are capable of finding grace and redemption.

Ladies and gentlemen, no one can deny that today Togo is deeply divided, or that the social fabric has not been deeply frayed by the political crisis of the past several months. But I think Martin Luther King’s philosophy challenges all Togolese people to renew the bonds that tie them, and work together – constructively, honestly, and, above all, non-violently – towards a national reconciliation based on the ideals and the values that the country was founded on.

I know it will not be easy. It will take time, and there will be setbacks. In the U.S. today, 50 years after his death, we still struggle to fulfill King’s promise.  Though there has been remarkable progress, we know the work is not finished.

But we continue to have faith, and hope, and optimism, because as King said, “the arc of the moral universe is long, but it bends toward justice.”

Thank you very much and enjoy the concert!