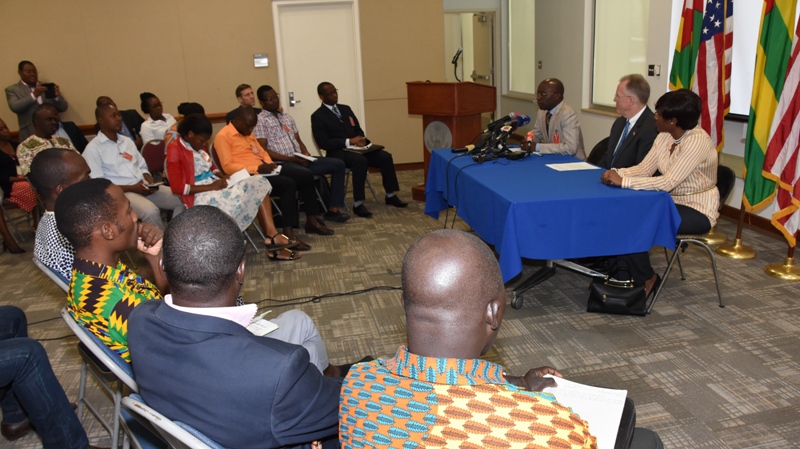 U.S. Ambassador to Togo David Gilmour announced that the Millennium Challenge Corporation’s (MCC) Board of Directors has given final approval to selection of Togo for an MCC « Threshold Program » (Programme de Seuil).

The MCC Board took its decision during its April 3, 2018 meeting in Washington, DC.  The $35 million Threshold Program for Togo is designed to improve access to high quality, affordable information and communication technology services for all Togolese; and to legitimize customary land rights and expand access to land.  These much-needed reforms will help the country on its path toward a more open and inclusive society with a market-oriented, private sector-led economy. The selection of Togo for the program is the culmination of nearly two years of research and consultations across the breadth of Togolese society, including with government, opposition, civil society, traditional leaders, and the private sector.

In a statement, Ambassador Gilmour said, “Togo’s selection for an MCC threshold program is a decision that will benefit all Togolese people, and something all Togolese can celebrate. The MCC threshold program will help realize Togo’s ambitions for reforms in the critical areas of ICT and land tenure.  MCC chose these focus areas after in-depth consultations and analysis with a broad cross-section of stakeholders from all segments of Togolese society. Reforms in these sectors will remove obstacles to growth, bringing increasing prosperity and greater economic opportunity for all Togolese citizens.”

In announcing the decision, the Board of Directors also directed MCC to continue to closely monitor events in Togo with a focus on citizens’ rights to freedom of expression and association, and due process.

“[The Togo Threshold Program] will move forward with extensive monitoring from MCC with a focus on civil liberties and citizens’ rights to freedom of expression,” said MCC Acting CEO Jonathan Nash. “This innovative program places Togo’s citizens and the private sector at the heart of Togo’s growth strategy, expanding access to the internet and communications technology, especially for underserved areas, women and youth, as well as clarifying land rights. Investments in these areas are critical to supporting democracy in the country, and spurring economic growth to reduce poverty to benefit the people of Togo.”

The MCC threshold program consists of technical assistance designed for countries that have demonstrated a commitment to improving their policy performance, but do not yet meet MCC’s strict eligibility criteria for larger compact investments. It is not a budget support program, meaning it will not involve a significant transfer of funds to the Government of Togo. The program also incorporates numerous accountability mechanisms to ensure that MCC funds are tied to results and are used only for programmatic purposes.

The program is expected to begin later this year. In the ICT sector, the program is designed to improve citizens’ access to high quality and affordable ICT services by encouraging private sector investments, developing an independent regulatory regime, expanding service to underserved areas, and increasing use of ICT. To address the land tenure constraint, the program will seek to expand access to formalized land through the recognition and protection of legitimate land rights in five pilot areas across the country. It will also seek to develop a regulatory framework to implement the new land code currently in parliament.

The U.S. Embassy congratulates Togo for its selection as a recipient of an MCC Threshold Program, and commends the hard work of the MCC Cell over the past two and a half years to set the conditions for the final approval of the program.

Every year, the Millennium Challenge Corporation, a U.S. government agency that works to reduce global poverty through economic growth, analyzes a vast body of independent data covering issues such as health, economic freedom, education, freedom of the press, the rule of law, government effectiveness, and levels of corruption. The data come from sources outside the United States government, such as non-governmental organizations and international institutions such as the World Bank and the United Nations.

On the basis of these assessments, the MCC produces a « scorecard »  of twenty indicators for each eligible country. In December 2015, on the basis of Togo’s improvement across these indicators, the MCC Board determined the country was eligible for a threshold program. Since then, the Government of Togo’s MCC Cell has worked closely with MCC staff to develop the program and to ensure that required reforms were implemented.