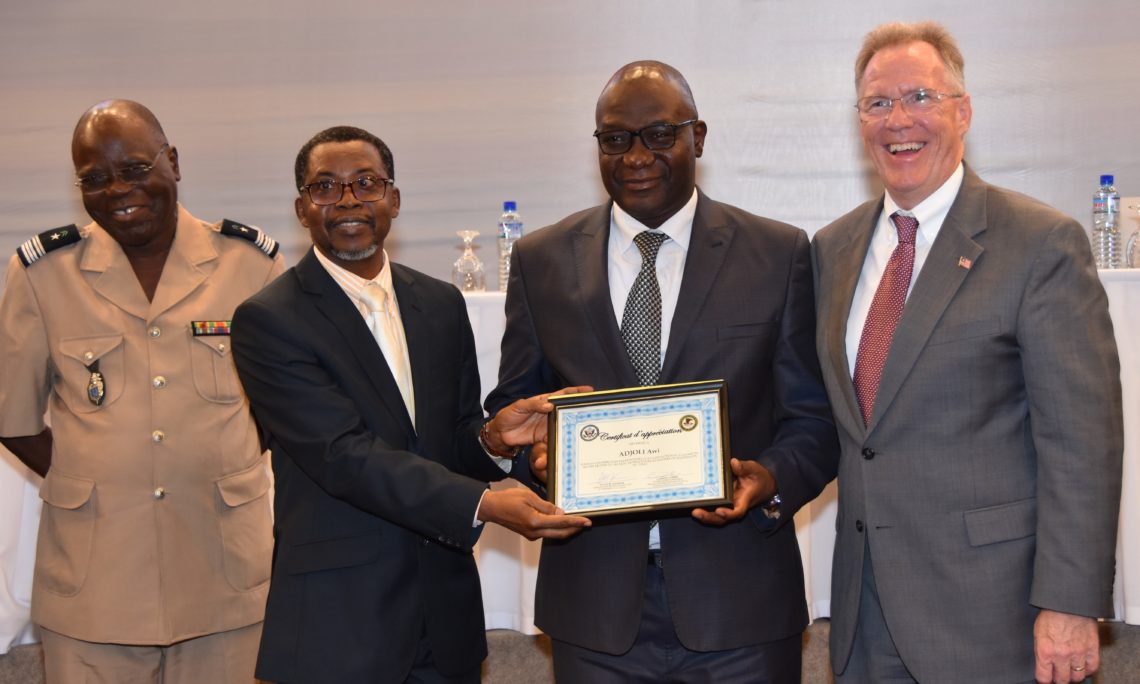 Lomé, September 25, 2018- The Embassy of the United States in Togo, in collaboration with the US Department of Justice’s Office of Overseas Prosecutorial Development Assistance and Training Program  (DOJ / OPDAT), closed the national extension program of the Procedures Manual on Narcotic Drugs in Togo today. Launched in May, the series of workshops gathered 189 magistrates, justice clerks, judicial police officers, water and forest officers and customs officers, and 490 police and gendarmerie trainees selected nationwide.

In his speech, Ambassador Gilmour said, “I remain convinced that by developing close collaboration with the Ministry of Justice and other actors in the criminal justice system, we can send strong signals to criminal organizations, through investigations, prosecutions, and effective trials. Togolese citizens are entitled to expect a firm and adequate response to the threat posed by serious criminality, otherwise the foundations of democracy would be in jeopardy. The US Government – as always – is willing to support rule of law and regional security by adhering to criminal proceedings on drug cases with transnational implications. “

The Manual is a “tool” to be used by law enforcement and justice actors in the context of the repression of narcotics offenses in Togo. With the support of the United States Embassy in Lomé and the United States Department of Justice, a committee of magistrates and judicial police officers from Togo wrote and printed the document to be officially presented to the Minister of Justice in February 2018. This is the first time in Togo that a document, such as the Handbook, collects good practices in the investigation, prosecution and punishment of Drug trafficking. It is intended to serve as a guide for criminal justice actors and aims, among other things, to raise and harmonize national practice throughout the criminal justice system. The members of the editorial board of the manual traveled the country to conduct eight workshops on the manual content to Togolese colleagues

Training and distribution of the manual encourage greater coherence among the various actors involved, raising the practice at the national level, and strengthening cross-border collaboration with neighboring countries. At the closing session, the members of the editorial board of the handbook presented a report of the workshops, for which they were commended.