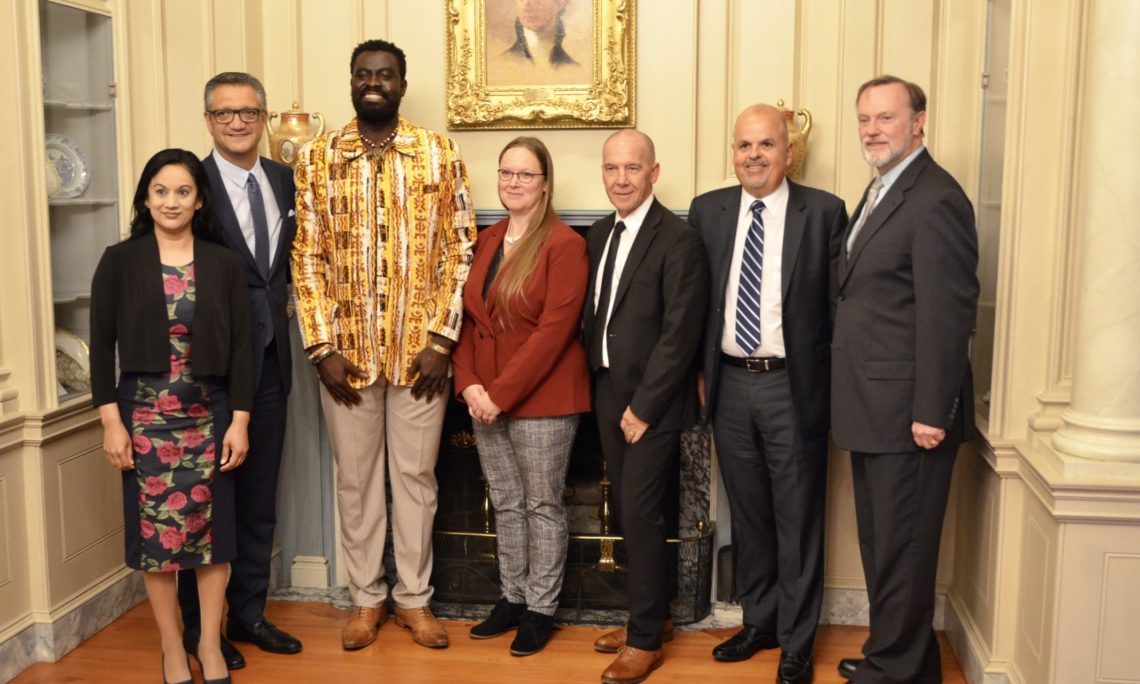 American-Togolese co-founders of Alaffia, Olowo N'Djo Tchala poses with some under secretaries of the State Department

Alaffia, a Togolese-American body care company, received the State Department’s top honor for its efforts to empower women in Togo. Under Secretary of State David Hale and Assistant Secretary of State Manisha Singh presented Alaffia co-founders Olowo-n’djo Tchala and Prairie Rose Hyde with the 2018 Award for Corporate Excellence in Women’s Economic Empowerment at a ceremony in Washington D.C. on Friday, Oct. 5.

The award ceremony was attended by State Department officials and U.S. and foreign diplomats including Assistant U.S. Secretary of State Tibor Nagy who oversees the Bureau of African Affairs, U.S. Ambassador to Togo David Gilmour, and Togo’s Ambassador to the U.S., Frederic Hegbe.

Tchala and Hyde were also invited to the White House to meet with Ivanka Trump who is spearheading a global women’s economic empowerment initiative that will be announced later this year. Ms. Trump congratulated Alaffia on the State Department award during a 30-minute meeting in the West Wing.

Alaffia employees and contract “gatherers,” who are mostly women, number more than 14,000 in West Africa. They collect shea nuts, coconuts, herbs and grasses, and, at Alaffia fair-trade cooperatives in Togo and Ghana, create shea butter, coconut oil, baskets and essence used in Alaffia beauty and body care products. These raw materials are then shipped to Alaffia’s manufacturing plant in Tumwater where 145 people are employed. The materials are refined, packaged and prepared for distribution throughout the U.S. and 10 countries.