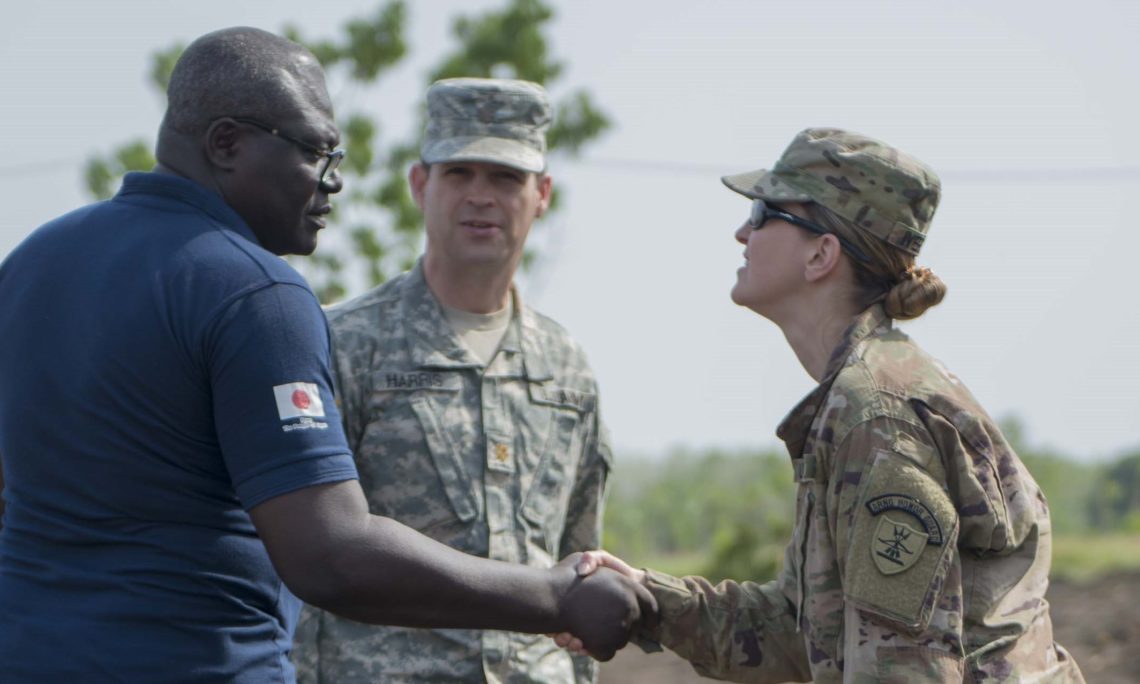 Lome, March 22, 2019 —As part of the Partnership Program between the North Dakota National Guard (NDNG) and the Republic of Togo, U.S. military forces and U.S. government disaster relief specialists partnered with the National Civil Protection Agency (ANPC) of the Ministry of Security and Civil Protection to organize a crisis simulation exercise testing the ANPC’s ability to respond to a natural disaster caused by flooding in the prefectures of Moyen Mono and Haho, from 18 to 22 March 2019.

The simulation exercise, titled Shilo Ahoe, took place in the villages of Kossi-Kopé, Gbondjohoe and Lawson-Kopé. The premise of the simulation was a massive flood caused by heavy rains necessitating the release of water from the Nangbeto Dam, inundating villages beneath the dam and creating hundreds of internally displaced persons (IDPs). The exercise was designed to test the ability of the ANPC to inform affected populations about the danger through early warning systems and quickly mobilize resources to provide assistance to affected areas and populations.

Over 250 Togolese first responders participated in the exercise, including firefighters, gendarmes, police, soldiers, doctors, and environmental and social experts. On the U.S. side, 13 NDGN instructors and three specialists from the Office of Foreign Disaster Assistance of the U.S. Agency for International Development (OFDA/USAID) participated. Hundreds of role-players drawn from the populations of the target area also participated. The total cost of the exercise was approximately 45 million FCFA, provided by U.S. AFRICOM.

The exercise concluded with a closing ceremony and VIP visit to the operations center and relief station set up to assist IDPs on March 22 attended by Togolese Minister of Security and Civil Protection Yark Damehame and the Chargé d’Affaires of the U.S. Embassy, Michael DeTar.

In his remarks, Chargé DeTar stressed the enduring strength of the military cooperation between the U.S. and Togo, and its benefits for the people of both countries.

“This exercise, the largest program put on by the North Dakota National Guard in Togo, is the type of realistic training that is essential to achieving our countries’ mutual goals of security and safety of the population,” said DeTar.

The exercise was part of the State Partnership Program, under which units of the U.S. military’s National Guard partner with the armed forces of a partner country in a cooperative, mutually beneficial relationship. The program now includes 75 partnerships with 81 nations around the globe. The NDNG has partnered with Togo since 2014, and to date it has conducted 14 major engagements with Togolese security forces including trainings on disaster preparedness, combat engineering, IED awareness, and more.