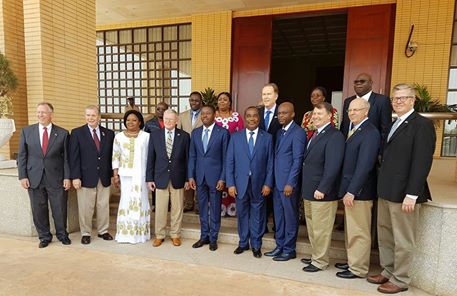 A delegation of U.S. Senators and Congressmen arrived Saturday on a visit to strengthen ties between the American and Togolese peoples.  President Faure Gnassingbe received the group, headed by Senator James Inhofe of Oklahoma, at the Presidency for high-level discussions. The delegation also took part in meetings at the National Assembly where they were welcomed by National Assembly President Dama Dramani and Second Vice President of the Assembly Madame Memounatou Ibrahima.

The delegation addressed a range of mutual interests and cooperation, and expressed U.S. support for Togo’s security, stability, and prosperity. In particular, discussions explored avenues to enhance trade between the U.S. and Togo in advance of the sub-Saharan Africa Trade and Economic Cooperation Forum (commonly known as the AGOA Forum) to be held in Lome later in 2017.  Members of the delegation also highlighted the importance and professionalism of the Togolese military, as evidenced by the contributions made by Togolese forces to peacekeeping efforts in the region.

The delegation was led by Senator Inhofe, Senior Member of the U.S. Senate Armed Services Committee and Senior Member of the U.S. Senate Environment and Public Works Committee and. It also included Senator Mike Rounds of South Dakota, and Representatives Vern Buchanan of Florida, Randy Hultgren of Illinois, Steve Pearce of Illinois, and Tim Walberg of Michigan.